News
You are here: Home / News / A global green new deal to save the world economy 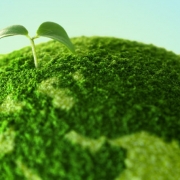 The UN Intergovernmental Panel on Climate Change 2018 report concluded that we only have twelve years left to avoid the environmental catastrophe cutting emission of global warming gases 45% from 2010 levels.

Facing this global climate emergency, a younger generation is spearheading an unprecedented planetary mobilization in support to save life on Earth and setting the agenda for a bold political movement with the potential to revolutionize society. This is the new agenda for a Green New Deal.

Major Party leaders and mayors in US and Ursula von der Leyen, President-elect of the European Commission in the EU, have made the Green New Deal the centerpiece of their economic strategy to transition towards a zero-emission post-carbon society.

But also key players of the economy – ICT; power and electricity; transportation and logistics; and real estate – are swinging towards a Green New Deal and fast decoupling from fossil fuels in favor of ever cheaper solar and wind energies and the accompanying clean technologies, green business practices, and processes of circularity and resilience that are the central features of an ecological society.

The levelized costs of utility-scale solar and wind installations have plummeted and are now below the cost of nuclear power, oil, coal, and natural gas, leaving the old conventional energies and accompanying technologies behind. New studies are sounding the alarm that trillions of dollars in stranded fossil fuel assets could create a carbon bubble likely to burst by 2028, causing the collapse of the fossil fuel civilization.

“Stranded assets” are all the fossil fuels that will remain in the ground because of falling demand as well as the abandonment of pipelines, ocean platforms, storage facilities, energy generation plants, backup power plants, petrochemical processing facilities, gasoline stations, auto service centers, and the myriad industries tightly coupled to the fossil fuel culture.

Fossil fuel dependent countries like Italy will be caught in the crosshairs between the plummeting price of solar and wind and the fallout from peak oil demand and accumulating stranded assets in the oil industry. The marketplace is speaking, and governments everywhere will need to quickly adapt if they are to survive and prosper.

Welcome PARadISE Consortium to develop a comprehensive energy service solution for public buildings, aiming to cover 100% of consumption with RES!

@REScoopEU & @energycities have launched a practical guide to help projects kick off communication and #engagement activities for the development of local community energy initiatives.👇

𝗛𝗘𝗦𝗧𝗜𝗔 𝗚𝗲𝗻𝗲𝗿𝗮𝗹 𝗔𝘀𝘀𝗲𝗺𝗯𝗹𝘆 in Amsterdam, has been a fantastic occasion for the 19 project partners to
◽ Meet for the 1st time
◽ Strengthen the project roadmap
◽ Plan upcoming actions and #events
◽ Present results, exchange knowledge and debate

The financing of the transition to a new third industrial revolution business...
PROSUME™ website uses cookies to improve your navigation experience and to help us improve the site. By continuing to browse the site you are agreeing to our use of cookies.OKMORE INFO
Scroll to top