News
You are here: Home / News / The energy-storage system backed by Vårgårda (Sweden) 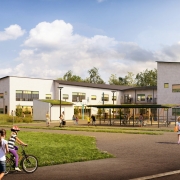 A fundamental part of the Third Industrial Revolution focuses on the ability of transforming all buildings into micro-power plants to collect renewable energies on-site and, wherever the source is unreliable, use hydrogen or similar storage technologies to store them.

Renewable energy from solar and wind sources have two main characteristic traits: they are widely distributed and intermittent. In order to properly harness such sources, it is necessary to have power plants that are themselves widely distributed, and storage systems that will render the ‘captured’ energy reliable for use at a later time.

Distributed renewable energy production is fairly simple—all we’d need to do to turn buildings into solar plants is to install solar panels on every rooftop. But solar energy presents its own set of problems. Not only is it only available during the day, there is also an abundance of it in the summer, often in excess. For these reasons, areas lacking in fossil fuel sources pose the complication of being able to consume energy produced hours
or months prior.

Two types of storage systems are therefore of vital importance to the above problems, one to accumulate and store energy produced during the day for later use (daily storage), and another to store unused solar energy from summers of excessive production (seasonal storage), for use during the winter, when sunlight is scarce. Energy storage for daily use is generally made of electrochemical batteries, like lithium ion, while the energy storage for seasonal use tends to be water sumps. Herein lies, thus, the importance of hydrogen energy storage.

Using a charge from electrochemical energy storage, any energy not immediately consumed can be used to split water atoms into hydrogen and oxygen, stocking the former in pressured gas containers. This stocked hydrogen can then be fed into fuel cells in order to produce both electrical and thermal energy whenever required, even months after the energy has been produced.

This combination of photovoltaic energy production and hydrogen energy storage is well-suited to both the household and commercial sector. In fact, any excess energy captured during the summer and stored as hydrogen can be reconverted into electricity and heating during winter through fuel cell combustion.

This is what is projected to take place in Sweden, in the small town of Vårgårda, where 6 residential complexes totalling 172 apartments will be constructed. The project aims to equip each building with its own autonomous energy production, coupled with a fitted hydrogen energy storage system. Surprisingly, this project is not backed by private enterprises, but by the municipality of Vårgårda.

Photovoltaic plants of 109kW are to be installed on each building’s rooftop, a capacity sufficient to satisfy its electrical and thermal energy requirements. Any excess energy will be converted into hydrogen that will be stocked, at a pressure of 300 bars in steel or carbon fibre cylinders, via electrolytic cells installed in the basement.

Each building will be self-sufficient enough to recycle even the water required for this system. The water vapour extracted from fuel cells will be condensed and stored in order to produce hydrogen at regular intervals, heavily reducing water consumption.

The innovation of this system is such that hydrogen energy storage systems can be used even at a household level, bringing us ever closer to a future where residential buildings of this kind will be commonplace. It’s a system that advances us towards the decentralization of energy production, where each individual will have the autonomy needed to free us not just from our dependence on fossil fuel sources, but also from the powerful few that control them. 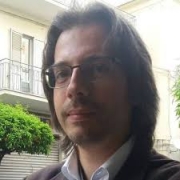 Sicilian environmental engineer and a native of the Province of Enna, Angelo Parisi deals with renewable sources and, following the regulatory changes introduced by the Romani decree, he joined the "SOS renewable" group. he is a member of the technical committee of CETRI-TIRES (the European Circle for the Third Industrial Revolution) and is part of the technical tables that promote regulations and rules for the promotion of renewable sources.
He has also collaborated in the preparation of studies on decarbonisation such as those concerning the Island of Pantelleria, the city of Taranto and the Region of Sicily.

The @UN support "#blockchain for #sustainability", a use of technology at the service of the great global challenges, to support those who are on the front line to fight climate crisis and to help make a global economy more sustainable.
https://news.un.org/en/story/2021/06/1094362

BAM! Canada is transforming what used to be the world’s largest coal plant into a huge #solar farm.

We have the solutions. Now time to ditch the pipelines and implement them.

We should be all aware of what #smartcities are and their potential. More needs to be done to reach the totality of the population and give the opportunity to take an interest in the exciting ways in which their cities are evolving.

The world’s largest coal plant is being turned into a huge #solar farm. It's time we all made the switch to #renewables

We have the solutions to the #climatecrisis. Let's shift the subsidies and implement them. #ActOnClimate

Mexico is building a #solar farm to power 1.3 million homes. They set a world record installing 18,990 #solarpanels in one day. https://buff.ly/2FjD9Z2

We have solutions to the #climate crisis. The only thing missing is the political will to implement them.