News
You are here: Home / News / Why P2P energy trading is key to digital transformation 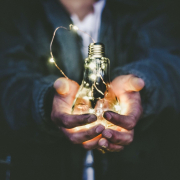 While over 100 countries have committed to net zero carbon emissions by 2050, progress on the ground is slow. With leading nations still relying on fossil fuels for their energy production, there’s a long way to go. To tackle this issue, the integration of renewable energy resources into the existing grid is emerging as a viable option.

P2P energy trading is an energy consumption model that turns passive consumers into active producers. Peer-to-peer (P2P) technology is fueling the sharing economy. It’s disrupted traditional industries like banking and it’s set to do the same for energy.

With the digitisation of the energy network begun by the smart meter rollout, the options for consumers to save money and cut carbon emissions are multiplying.

The move from centralised energy production to a decentralised peer-to-peer model presents its challenges. First, there needs to be a greater adoption of small-scale renewable energy generation eg. But there are also technical and regulatory challenges to address.

In this article, we’ll explore how distributed ledger technologies like blockchain address these challenges and enable consumers to buy and sell their own energy. As such, we’ll show that P2P energy trading is the future of the digitally-enabled energy grid.

The current state of energy trading

Before 1996 the supply of energy in the European market was controlled by monopolies. They owned production, distribution, and trading of energy. These monopolies were able to set energy prices and restrict access to new entrants since they also owned the infrastructure.

In order to stimulate competition in the internal energy market, the European Union began liberalising electricity and gas markets in 1996. Instead of developing competing networks, liberalisation separates production and supply on the one hand and distribution on the other.

This meant that generation, transmission and distribution became “unbundled”.

Where a monopoly had to be maintained (typically distribution) regulations would control the activities of operators. This would then leave energy supply open to competition.

To enable fair access to the grid for producers and suppliers, distribution would have to be maintained by independent network operators: 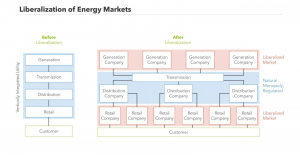 The Renewables Directive (Directive 2009/28/EU) introduced in 2009 requires network operators to ensure their grids are able to receive supplies from renewable energy production resources. They are also required to provide priority access to these resources.

What is P2P energy trading?

To meet net zero carbon emission targets, mass adoption of renewable energy resources is needed. Traditionally, consumers of energy are the passive recipients of supply from utilities. As the concept of democratisation of resources gains popularity, coupled with greater environmental awareness, there’s a growing distrust of utility companies.

The prosumer has a key role to play in the emerging energy trading economy. A prosumer consumes energy but also resells any surplus back to the grid, or to a neighbour. Peer-to-peer, or P2P energy trading is  the natural vehicle for this new economy.

Prosumers access the main grid through microgrids. A microgrid is a small-scale power generation system. It generates renewable energy locally via devices such as solar panels or wind turbines, and connects to the main utility grid. It’s a two-way system that balances the load between local power generation and the main grid. Thus, prosumers can buy or sell power from or to the grid. Microgrids can also operate independently in what’s called an islanding mode, disconnected from the main grid.

A decentralised P2P energy trading grid has many benefits including cost savings for consumers, increased network resilience, and fewer grid losses. But as the grid grows larger, trades between independent agents become more complex. Thus, there’s a need for a stable and reliable solution for data exchange and load balancing on the network.

Blockchain technology is generating a lot of interest in that regard. A blockchain is an open distributed ledger that records transactions verifiably and permanently. Distributed ledgers themselves are databases which store information across multiple sites. They aren’t controlled by a central authority. Combined with smart contracts, a blockchain stores tamper-proof records of transactions.

Setting up a P2P energy trading platform is not just about the technology. Market and regulatory factors contribute to a successful implementation.

Regulations. Regulations govern the collection and use of data. They also outline roles and responsibilities of stakeholders, define market operation rules, and protect the rights of consumers. They provide for network access criteria and network access charges.

We’ve just seen how P2P energy trading enables consumers to take control of their energy supply, contribute to reducing carbon emissions, and make a positive contribution to their community.

A P2P mini-grid enables homes connected to the grid to access surplus electricity. This improves access to local renewable power generation. It also makes the community resilient to power outages and may also improve access to the main grid. 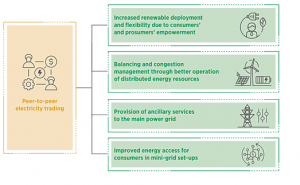 A P2P microgrid balances local supply and demand in real-time. It reduces peak loads on the main grid. Thus it reduces the need to invest in capacity and infrastructure that meets peak demand. The operator of the main grid can further incentivise prosumers that help reduce grid congestion. Furthermore, the P2P microgrid can serve as a virtual power plant that coordinates distributed energy resources.

As part of its commitment to place the EU at the forefront of the clean energy transition, the European Commission released the Clean Energy for all Europeans Package (CEP) in 2016. The package consists  of 8 laws affecting, among others, renewable energy, energy efficiency, and most notably electricity market design.

With the package, the EU aims to place the consumer at the centre of not just consumption but the generation of electricity. This will give European consumers a greater choice of electricity supply, access to reliable price comparisons, and the opportunity to produce and sell their own electricity.

​Citizen Energy Communities (CECs) will have the power to generate, distribute, consume, store, or provide other electricity services such as electric vehicle charging to its members. CECs are based on voluntary participation and are controlled by members and shareholders. The CEP also makes provisions for Renewable Energy Communities (RECs) where all energy production assets are renewable.

​The Clean Energy Package stipulates that the energy trading process should not be hindered by or influenced by the collection of network tariffs. Furthermore. CECs are empowered to apply whatever technology they need to facilitate the trading process. This leaves the door wide open to P2P energy trading platforms.

Ever since 190 countries committed to reducing global carbon emissions at the Paris summit in 2015, the European Union and other governing bodies have been searching for ways to encourage mass adoption of renewable energy supplies. P2P energy trading empowers consumers with access to fair energy prices but also turns them into producers that serve their local communities. It comes at just the right time where environmental responsibility and the democratisation of resources is becoming centre stage.

The Ice Is Melting
The Land Is Burning
The Ocean Is Dying
The Living Planet Is Unravelling
It's happening on our watch.

How Blockchain Technology Will Save the Environment
PROSUME™ website uses cookies to improve your navigation experience and to help us improve the site. By continuing to browse the site you are agreeing to our use of cookies.OKMORE INFO
Scroll to top