News
You are here: Home / News / How Blockchain Technology Will Save the Environment 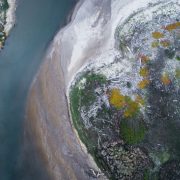 Ever since the Paris Agreement was drafted in 2015, there has been growing pressure on governments, institutions, and businesses to reduce their carbon footprints. Yet, despite technological innovations such as artificial intelligence, big data and IoT, monitoring and reducing our impact on the environment has been challenging.

Blockchain technology has long been associated with cryptocurrencies such as Bitcoin. It’s a distributed ledger technology (DLT) that stores and processes data in a peer-to-peer (P2P) network with no centralised authority. In fact, blockchain’s applications extend far beyond cryptocurrencies. People with interest in the environment are promoting applications in forestry, farming, energy production, pollution monitoring, recycling, and carbon emission tracking.

Blockchains are tamper-proof databases that make it possible to store, process, and share any kind of information. It’s therefore possible to track and verify transactions that carry an environmental impact and progress to net zero carbon.

In this article, we’ll examine a few applications of blockchain in environmental monitoring, and how it contributes to data management and ecological progress.

What is blockchain technology?

Blockchain is a distributed ledger technology (DLT) that keeps a record of all transactions across a peer-to-peer (P2P) network. Blockchain stores, shares, and synchronises data in blocks. Blocks represent a set of transactions. Each new block is linked to the previous block, literally creating a chain of blocks. For example, each new block of bitcoins is linked to the previous block tracing back to the Genesis Block released on January 3rd, 2009.

The release of each new block must be approved by all the participants on the network -i.e. networked computers. A consensus mechanism sets the rules for the verification, validation, and addition of transactions to the public record (or ledger). The most common consensus mechanism is a called “Proof of Work” (POW), where participants compete to find a solution to a complex cryptographic algorithm. Once a “miner” finds the solution, the other participants on the network verify the answer, and the block is added to the blockchain. All copies of the ledger are updated across the network, and the changes are permanent.

Each block is timestamped. A unique hash references the previous block. Public key cryptography ensures the authenticity and integrity of transactions. Constant updates and validation to the blockchain make unauthorised changes mathematically impossible. So, the public ledger held on each participant’s machine is unique and immutable, ensuring trust among the participants.

Further, smart contracts enable the automatic execution of contracts with no human intervention, or verification by a central authority.

Contrast blockchain ledgers to the traditional ledgers used by banks: the bank acts as the exclusive manager of the ledger, with sole responsibility for storage, updates, and verification of transactions.

Now that we have some understanding of blockchain technology, how can it be used to positively impact the environment?

It might not always be obvious, but our daily choices leave a carbon footprint. From the obvious,

like filling our cars with petrol, to the more subtle, like buying a cup of coffee or upgrading our cloud storage plan.

Carbon credits provide a mechanism within which organisations and individuals can take responsibility for their carbon choices. Carbon credits were meant to provide a tangible and practical way to meet out carbon reduction targets.

Yet the carbon market has been beset with difficulties pretty much since carbon credits were first proposed in the 1997 Kyoto Protocol. Differing standards and regulations have resulted in a lack of confidence. And a lack of transparency prevents many from trusting carbon credits as an asset.

Without a universally accepted ledger, it’s difficult for individuals and organisations to track how much carbon they’ve used or offset. By now, you understand a blockchain is an immutable and permanent record of transactions. It’s the perfect mechanism to tokenise and scale carbon trading. It provides for transparent and reliable tracking of carbon emissions. It allows businesses, consumers, and governments to track the environmental impact of the products they buy, sell, and produce.

There’s little doubt that smart meters have had a positive impact on environmental awareness. They’ve sparked a greater awareness of energy usage and spurred an interest in renewable energy. Coupled with advancements in IoT devices, energy companies have a unique opportunity to transform the energy sector.

The only problem is the energy grid is mostly controlled in a centralised fashion. This creates

inefficiencies where surplus energy is not redistributed to where it’s needed. Peer-to-peer (P2P)

energy trading is an energy production structure that decentralises this control and allows consumers to also become producers of energy.

Homeowners produce electricity from solar panels, for example, and redistribute excess power to other peers (homeowners) on a local microgrid.

The advantage is power is generated, stored, and distributed locally. And it limits the need to transmit energy over long distances where losses will occur during distribution.

Blockchain algorithms are the perfect device to regulate such a network. They can monitor energy usage on the microgrid and redistribute excess power to where it’s most needed. Again, smart contracts automate tariff charges and other business rules.

With the U.N. estimating that 300 million tonnes of plastic waste are produced every year, and only 9% being recycled, plastic waste carries serious implications for the environment. Even more alarming, if current trends continue, there will be more plastic than fish in the oceans by 2050.

The recycling industry is plagued with inefficiencies and a lack of data. There’s a need for greater supply chain visibility for better decision-making in resource planning, pricing, and inventory management.

Companies like RecycleGO are building applications to track every piece of data about an item from production to consumption to recycling.

Plastic Bank is working on a blockchain-powered app that will allow people in third world countries to exchange plastic items for cryptographic tokens. These tokens can then be exchanged for items and services like phone charging and cooking fuel.

With a growing degree of environmental awareness, consumers want to buy products that are ethically sourced. But most feel they simply don’t know how to tell the difference. It’s far too easy for companies to withhold information about how they made their products, what materials they used, and how they dispose of waste.

Let’s say you’re a furniture manufacturer and you wish to prove you only use wood from sustainable forests. You would have to trace every piece of wood from forest to the final piece of furniture. At the moment, this is done through a process of labeling and certification. The problem with this approach, there’s no way of validating every single piece of wood. To complicate matters,

each certification organisation follows their own process. Thus, the furniture manufacturer is forced to follow the certification process imposed by the particular certifying body and has no way of proving conclusively their wood is sourced responsibly.

The Programme for the Endorsement of Forestry Certification is responsible for certifying some 700 million acres of forests. It’s been investigating the use of blockchain technology as a way of tracing the provenance of wood. Again, the benefits are evident. Blockchain technology is capable of recording every transaction in a publicly accessible ledger which no single party can manipulate.

The same applies to food. Blockchain technology could record the provenance of every ingredient and save millions of consumers from the complications of allergies. It could also show where food was farmed locally or prove that crops were produced by a fair trade farmer.

Environmental treaties carry moral weight, but do they carry legal weight? With trust in governments and public policies at an all-time low, there’s often a feeling among citizens that there’s little incentive for governments or businesses to keep their commitments. Rightly or wrongly, there’s a suspicion it’s far too easy to manipulate data to serve political needs.

Blockchain would make it very difficult for corporations and governments to misreport their progress and renege on their promises. Once data is recorded on the blockchain, it’s publicly available for all to scrutinise.

The blockchain could also serve as a record of legal treaties themselves, again leaving them open to scrutiny.

Most of us have heard of blockchain and the extravagant returns that are possible in the cryptocurrency markets. It’s important to remember that blockchain is the technology that powers these markets. The same technology can be applied to many other markets. At its core is a system of recording and validating transactions without relying on a single authority. It has the power to

From #carbontrading to #wastemanagement: in this post we examine a few applications of #blockchain in environmental monitoring, and how it contributes to data management and ecological progress.
https://prosume.io/how-blockchain-technology-will-save-the-environment/

PROSUME™ website uses cookies to improve your navigation experience and to help us improve the site. By continuing to browse the site you are agreeing to our use of cookies.OKMORE INFO
Scroll to top