News
You are here: Home / News / Blockchain is Paving the Way for Renewable Energy 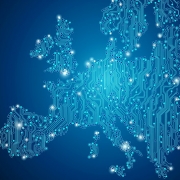 Green technologies have undergone rapid developments in recent years. This has been spurred by privatisation in the energy sector, and the unbundling of activities begun by the EU in 1996. The commitments made to decarbonisation in the Paris Agreement of 2015 further cemented the central role of renewable energies in the design of the energy markets of the 21st century.

Yet, for all their promise, renewable energy sources are unpredictable and reliant on weather. This raises fresh challenges in the operations of energy grids as new technologies are sought to ensure their safe operation.

Blockchain is a distributed ledger technology (DLT), that has attracted considerable interest from industry, governments, and academia. It’s a decentralised database on a peer-to-peer network that promises significant innovations in industry. Yet, despite the headlines, the energy sector has been lagging in adopting blockchain technology. Nonetheless, a growing number of startups, developers, and investors are harnessing the power of blockchain to build the grid of the future.

The decentralisation of the power grid

The introduction of smart meters and IoT connected devices has accelerated the emergence of Distributed Energy Resources (DERs). This is further accentuated by breakthroughs in solar panel technology and battery storage. These breakthroughs mean households can store energy efficiently for power generation and load balancing. This creates the prospect of trading and consuming energy cost-effectively. Energy trading is powered by  peer-to-peer networks where citizens trade on local mini grids. Peer-to-peer (P2P) networks signal the beginnings of a radically new energy consumption model. In this model, consumers also become producers of energy. They’re called prosumers. These green energy producers trade their surplus power with their peers on the network. They accomplish this without the controlling authority of a central network operator. This represents a major shift from centralised power generation to democratised energy sharing.

This new operating model does, however, create its own challenges. A decentralised many-agent exchange system needs smart management for reliable operation. Advanced communications and encryption are required between the many parts of the distributed network. The size of the challenge is highlighted by the EU’s commitment to invest EUR 1.1 trillion between 2021 and 2027 as part of its Green Deal initiative. This is further highlighted by its commitment to a renewables share in energy production of 32% by 2030.

Blockchain developers are naturally excited by the challenges presented by the decentralised power grid. Blockchain is the natural solution to a web of complex transactions. It’s the solution to balancing loads in a distributed network. The technology is potentially as revolutionary as the internet and introduces significant process improvements. It replaces centralised control with decentralised consensus mechanisms. It encourages a spirit of transparency, removes intermediaries, and increases trust.

Over a hundred use cases have been identified for the application of blockchain in renewable energies. These include, for example, authenticating renewables at the point of origin. Or regulating energy flows on the grid. Of all these applications, peer-to-peer energy trading is gaining the most traction. It’s underpinned by smart contracts which trigger automatically once conditions are met. For example, smart contracts could match buyers and sellers of electricity in real-time. Once electricity is delivered, payments are made automatically.

Blockchain-enabled decentralisaton introduces a new level of transparency and trust.

Blockchains allow users to make changes to the ledger simultaneously. Users reach agreement on the network via a consensus mechanism. Once a block is confirmed, it’s added to the blockchain. A unique hash ties each block to the previous block. Every user on the network has complete visibility of every transaction recorded on the blockchain. Compare this to a bank which uses its own methods for confirming transactions. Plus, you’d only have access to records of your own transactions, nobody else’s.

Blockchain for the smart grid

Distributed energy systems, embodied by P2P energy networks, have three strategic objectives: decarbonisation, decentralisation and digitalisation. This is underpinned by the EU Electricity Directives, which shift the balance of power in the consumer’s favour. It’s further underpinned by the commitments made by the EU in its European Green Deal initiative. However, the current structure of the energy grid does not yet permit the full development of a smart and decentralised grid. There are insufficient incentives for small market players or consumers to fully participate. It’s a work-in-progress which blockchain developers are keen to embrace. They’re developing applications that realise the vision of the smart grid.

Operating a decentralised energy system presents many challenges. A grid management system would need to know how much energy is produced and consumed at different locations and times on the grid. It would need to understand usage patterns, demands, and production capacities of a large number of prosumers. This implies the coordination of resources between multiple energy sources. And requires the monitoring and processing of an enormous amount of data. This presents unique challenges in communications and data management.

A smart infrastructure that can support voluminous amounts of data is required. The introduction of smart meters and internet connected devices (Internet of Things) is enabling the collection of vast amounts of data. Artificial Intelligence (AI) and Machine Learning (ML) are enabling the use of this data to identify usage patterns. Thus, variations in supply and demand of energy can be monitored to balance the load across the grid.

The economic benefits of applying blockchain technology to energy consumption are significant. Energy prices are rising. And so is fuel poverty. In the UK alone, consumers are facing a GBP 139 million rise in energy bills. Blockchain technology automates transactions, increases trust, improves efficiency, and reduces costs for energy producers and consumers.

We now understand what blockchain technology can do to enable a more efficient and economical power grid. It’d be useful to turn our attention to some practical applications of blockchain in renewable energy production.

Besides facilitating the transfer of data across a distributed energy network, blockchain applications help monitor and optimise resources across these networks. They monitor supply and demand while redistributing excess energy  where it’s needed. Blockchain applications could also facilitate the sharing of resources, such as electric vehicle charging points.

Data privacy is a major regulatory requirement. This was highlighted by the introduction of the GDPR regulations in 2018. In a decentralised energy network powered by intense transfers of data, protecting personal information is a top priority. Blockchain applications confirm transactions using cryptography. Ciphers and encryption keys encode data in transit. Further, Zero-Knowledge Proof (ZKP) algorithms add another layer of security to blockchain applications. They can even protect individual blocks from unauthorised access.

It may feel counter-intuitive to think that a secure data network is also transparent. An attractive benefit of blockchain is that you can pair it with ZKP technology and choose which information to share. This way, you can prove the source of information without needing to reveal anything else about the data underneath it. This improves transparency and trust in decentralised energy networks.

Blockchain applications powered by smart contracts enable precise and automated billing via smart meters. This opens up possibilities for innovative payment solutions, such as micro-payments, pay-as-you go, or prepayment.

Imbalances between energy supplied and energy consumed are a daily reality in the energy markets. These are mainly due to delays in reconciliation and confirmation. Blockchain applications could trace energy generated and consumed back to their sources. This would enable real-time visibility of imbalances and speed up confirmations. And because they’re already enabled by smart contracts, and communicating with smart meters, they could enable real-time billing. In this context, blockchain applications could register individual consumer preferences and tailor offers to their individual needs. Thus, energy producers benefit from a risk-reduced profile and consumers from personalised product offerings.

We’ve just touched on the delays and latency issues affecting the energy markets. Reconciliations and confirmations are often done manually, involving several intermediaries such as brokers, banks and regulators. As each intermediary verifies transactions, the process from initialisation to settlement is slow and time-consuming. Each step in this process adds costs for energy producers and consumers.

Blockchain applications connect producers with suppliers directly. Thus, small operators and localised generators circumvent the fees associated with intermediaries. Smart contracts could automate the search for deals. Once a match was found, it would authorise payments automatically. It would record every transaction permanently in the blockchain. This record would be available for scrutiny by the consumer, system operator, or producer. This scenario would be impossible to achieve with the current power grid system.

One of the most attractive features of blockchain is the automation of transactions and processes. This increases the adoption of P2P energy trading models and encourages the production and consumption of local renewable energy resources.

The majority of use cases of blockchain applications are in P2P energy trading. It’s easy to see why: P2P energy trading facilitates the trading of energy between producers and consumers. In this model, consumers are also producers (prosumers). They produce their energy locally from renewable energy sources (solar and wind) and trade their surpluses with their peers. So consumers either consume or produce energy depending on their needs. Because prosumers trade on local mini grids, it’s the perfect setting for testing nascent blockchain applications. The challenge for blockchain developers, however, is how to fit this model into the existing distribution network. Ultimately, network operators will retain responsibility for the distribution of energy, while blockchain improves its management and delivery.

Locally generated energy significantly reduces loads and distribution losses on the power grid. It empowers local communities to generate power from renewable energy sources while providing ancillary support to the power grid. Thus, the power grid can ensure contigency supply  as required and defer expensive upgrades to the network.

Distributed energy resources can operate in synchronicity with the power grid or in complete autonomy. Thus, P2P energy trading is a positive socioeconomic development which shifts control back into consumers’ hands and gives them a sustainable alternative to fuel poverty.

System operators were created in the aftermath of the EU Electricity Directives which sought to deregulate the energy markets and promote competition. System operators own the physical delivery infrastructure and are responsible for its maintenance. Even in a decentralised energy network, their role is central. Blockchain applications will help network operators monitor load balances much more accurately and reflect network charges much more fairly. Coupled with complete transparency of transactions in the blockchain, consumer trust and satisfaction will increase significantly.

Blockchain applications have been the subject of resounding headlines in the cryptocurrency markets. Yet, the “crypto” in cryptocurrency extends much further than these markets. It’s a complete technology that uses cryptographic algorithms to secure transactions on a network. It does so without an interfering intermediary. Since trust is often at the root of commerce, blockchain applications will revolutionise how we source, store, and consume energy.

The Ice Is Melting
The Land Is Burning
The Ocean Is Dying
The Living Planet Is Unravelling
It's happening on our watch.

EIT Community Booster announces 20 selected New European Bauhaus ventures and...
PROSUME™ website uses cookies to improve your navigation experience and to help us improve the site. By continuing to browse the site you are agreeing to our use of cookies.OKMORE INFO
Scroll to top